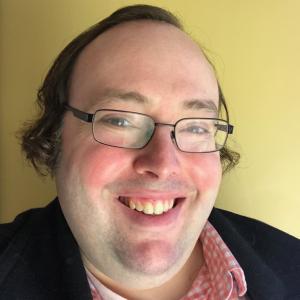 As a senior front-end developer for Lullabot, Marc focuses on creating great experiences no matter the device, browser or abilities of the person accessing a site. Marc is currently serving on the Drupal Diversity and Inclusion Workgroup's Leadership Team and has also served as co-maintainer of Drupal 8’s core Responsive Image and Breakpoint modules.

He previously worked for a local Twin Cities suburb for 10 years, doing web development and graphic design; he also served on the board of the National Association of Government Web Professionals for five years, including a year as President of the organization. Marc earned a BA in English and a concentration in Public Service from Albion College in Michigan, as well as degrees in web design and graphic design at Minneapolis Community & Technical College.

Marc enjoys living in the Twin Cities suburbs with his wife and five-year-old daughter, as well as their dog, and getting together regularly with family who live nearby. His hobbies include going for walks, taking cooking classes, learning languages and helping to plan family vacations.

“So long and thanks for all the requests: Front-end performance in the age of http/2”

“Won’t you take me to Chunk-y Town: Component-based theming and the future of Drupal front-end development”

“Sizing up responsive images: Make a plan before you Drupal”

“One Second or Bust: The Quest for Quick Page Loads”